What to do after Tier 1 Entrepreneur visa refusal? In terms with paragraph 245DB(a) of Immigration Rules a Tier 1 Entrepreneur Application must not fall for refusal under the general grounds. However, if an application falls for refusal under general grounds, then in terms with sub-paragraph 245DB(m) an Entry Clearance Officer (ECO) has the discretion not to carry out assessment required in subparagraph 245DB(f) or 245DB(i) and can reserve the right to carry out further assessment subsequently in any reconsideration of the decision. Furthermore, a leave to remain applicant must not be an illegal entrant. The migrant must not be in the UK in breach of immigration laws except that, where paragraph 39E of these Rules apply, any current period of overstaying will be disregarded. The migrant must, unless he provides a reasonable explanation, comply with any request made by the Secretary of State to attend for interview.

Please note, a Tier 1 Entrepreneur to ILR application does not attract the general grounds for refusal under paragraphs 320 to 324 of the Immigration Rules.

This is a widespread problem with entry clearance and extension applications. In several instances, especially those relating to third-party funding the applicant is not able to provide a satisfactory source of funding and upon checks by the immigration officer, it was found that the money is not available for disposable in the UK.

4. The Main Purpose is Not Doing Business

If an applicant is not able to satisfy the ECO during the application assessment process, then the ECO is not clear about the purpose and might question the intentions of the applicant i.e. the applicant is only using the route to settle in the UK, without doing business in the UK. Accordingly, from the evidence available with the application and where applicable during the interview process, the ECO can gather refusal reasons to justify his opinion about the intentions of an applicant. However, for building a line of argument the ECO usually questions the elements of the genuine entrepreneur test, especially the business plan submitted with the application.

If the applicant has had a previous Tier 1 Entrepreneur application refused on credibility grounds, a full Genuineness Test will be carried out and application can be refused if there is no reason to believe the applicant’s circumstances have changed to show they have now become a genuine entrepreneur.

Refusal after the Interview

In most cases, the applicant was unable to show sufficient knowledge about their business plan or had no evidence to show that they had carried out any market research. There were a few cases where the caseworker had commented that large parts of the business plan seemed to have been taken from generic examples from a commercial website providing off-the-shelf business plans.

In most of the cases, Home Office refuses extension due to insufficient evidence of employment, maintenance or claimed investment.

Extensions are also refused if the Tier 1 (Entrepreneur) migrants have set up a shell company for meeting the minimum qualifying investment, without any underlying economic activity. In most of the cases, prima facie the shell business creates two jobs. However, the employees did not undertake any meaningful commercial or business activity. Apparently, the applicants created paid jobs to achieve the objective of meeting the extension and settlement criteria.

Applicants switching to the entrepreneurial route from another immigration category, rather than those who applied overseas to enter as a Tier 1 (Entrepreneur), account for the higher proportion of mediocre quality and potentially abusive applications at the extension stage.

9. The Subjectivity of Genuine Entrepreneur Test

Indeed, the Genuine Entrepreneur Test is quite subjective. Therefore, during the assessment process, several questions regarding the genuineness of any application can arise. For instance, questions about the source of money, education, and skills set of the applicant to run a business, previous experience of the UK, business, and marketing research. Accordingly, the ECO through the paper genuineness test or oral genuineness test can fail any application as ample arguments can be built for either passing or failing a genuineness test. Therefore, it is mostly a grey area. And depends on the documentation and the performance of an applicant during an interview. Nevertheless, applicants with a good track of working as a businessperson, with adequate education and immigration history have a fair chance to pass the Genuine Entrepreneur Test.

The genuineness test as currently practised brings a level of uncertainty to the route. And it not helpful for the applicants, immigration advisers or the businesses involved in the process. Certainly, the genuine entrepreneur test is a subjective mechanism. And differentiate entrepreneurs who wish to set up a valid business can meet the entry criteria. The genuine entrepreneur test introduced in Jan 2013. And the purpose was to reduce the perceived abuse of the route. However, since then the Tier (Entrepreneur) route remains highly susceptible to being abused. The process for assessing the suitability of Tier (Entrepreneur) application is quite flawed. Therefore, often fails to differentiate between genuine and non-genuine applicants.

The Tier 1 (Entrepreneur) route is for those who wish to establish a genuine business, which intends to generate jobs in the UK. However, during 2008-2012 a considerable number of those applying in-country for leave in the route were those that had come to the UK for the purpose of the study and made speculative applications simply to extend their stay in the UK. Accordingly, only a few applicants engaged in any meaningful genuine entrepreneurial activity. However, a sizeable proportion of entrepreneurs took employment in breach of their conditions, especially in low-skill occupations.

The Immigration Statistics indicates that during the year ending June 2015. 5,026 in-country applications from main applicants were considered, out of which 44 per cent were granted. The number of visas being granted in-country under this route increased steadily between 2008 and 2012, followed by a sudden surge in 2013, which is intricately linked to the closure of Tier 1 (Post-Study Work) route. Accordingly, in 2013, the number of Tier 1 entrepreneur refusals increased substantially. Due to the introduction of the genuine entrepreneur test. The refusal rate peaked at 67 percent in the year ending September 2013 before falling back in 2014.

Example of the Abuse

For instance, an applicant initially had leave to remain on Tier 1 (Post-Study Work) visa which was due to expire in December 2013. In October 2013, the applicant set up a business. As proof of business activity, the applicant provided a contract for marketing and advertising services. However, during the assessment process, it was concluded that there was no evidence to suggest that the client had established a legitimate company, or that the two directors of this company. Furthermore, a business owner needs to inform the HMRC if a company is active within three months of starting a business. However, the applicant had not registered with HMRC. Therefore, the applicant did not comply with the HMRC regulation and did not do any meaningful effort to make the company active.

At an interview, the applicant initially stated that they were going to run a marketing company, but later stated they were looking to run an HR consultancy business and/or recruitment agency. The candidate provided no details as to how the £50,000 would be invested, given that they were running the business from home using a computer, internet connection and printer. However, the immigration officer refused the Tier (Entrepreneur) visa as he did not deem the applicant genuine.

Tightening of the Route

Since 2013, the Home Office has introduced a few measures to tighten the route against suspected abuse. In January 2013, the genuine entrepreneur test was introduced, which included the option for caseworkers to request that applicants attend an interview. Further changes saw migrants unable to switch from Tier 4 unless they had £50,000 funding from a specified source. In July 2014, the Home Office restricted the provision to switch into the category from study categories and rom Tier 1 Post-Study Work category. Consequently, the number of extension applications reduced from 5,936 in 2013 to only 1,273 in 2015 and success rate nearly doubled in 2017 to reach a level of 67.29%, which in 2013 reached its lowest ebb of 35.92% due to mediocre quality of extension applications.

11. Leakage from the System

Applicants granted initial leave to enter or remain under the entrepreneur route required to apply for an extension of three years. However, during 2008-2012 fewer apply for an extension. The leakage indirectly contributed towards a higher refusal rate of the entry clearance applications as the assessment became more subjective due to:

13. Insufficient Training of the Immigration Officers

In fact, insufficiently trained officers may not make the right decisions about applicants and business plans, especially when the criteria are too subjective. The Government cannot determine ex-ante which combinations of applicant and business plan might become commercial successes. It is not advisable to aim to do so. Nevertheless, immigration officers aim to assess the genuineness of the business plan rather than its likelihood of success.

Certainly, at the policy level, there is an ambiguity to clearly define an ‘entrepreneur’. Accordingly, the MAC report stated:

In practice, any business has a risk and return profile. Most of the applicants usually intend to establish a similar business, which they are doing in their home country.

Indeed, there are some highly skilled industries which are more prevalent amongst the businesses set up by entrepreneurs than in the overall UK business population. These include the professional, scientific and technical activities sector and the information and communication sector, which jointly account for 36 percent of entrepreneurs’ activity. However, there is also a substantially higher prevalence of entrepreneurs in the more generally lower skilled wholesale and retail trade, administrative and support service activities, and accommodation and food service activities sectors.

The following table illustrates the details of the entrepreneur businesses during 2008-15.

Another major theme which has created ambiguity about the objectives of the route. The differentiation between business start-ups and existing business. However, on June 13, 2018, the Home Office announced a new “startup” route. And the details of which launched in early 2019. The new start-up route announced during London Tech Week, widen the applicant pool of talented entrepreneurs. And make the visa process faster and smoother for entrepreneurs coming to the UK. Moreover, in 2019 the start-up visa route has replaced the graduate entrepreneur route. And in March 2019, the UK innovator visa has replaced the entrepreneur route. 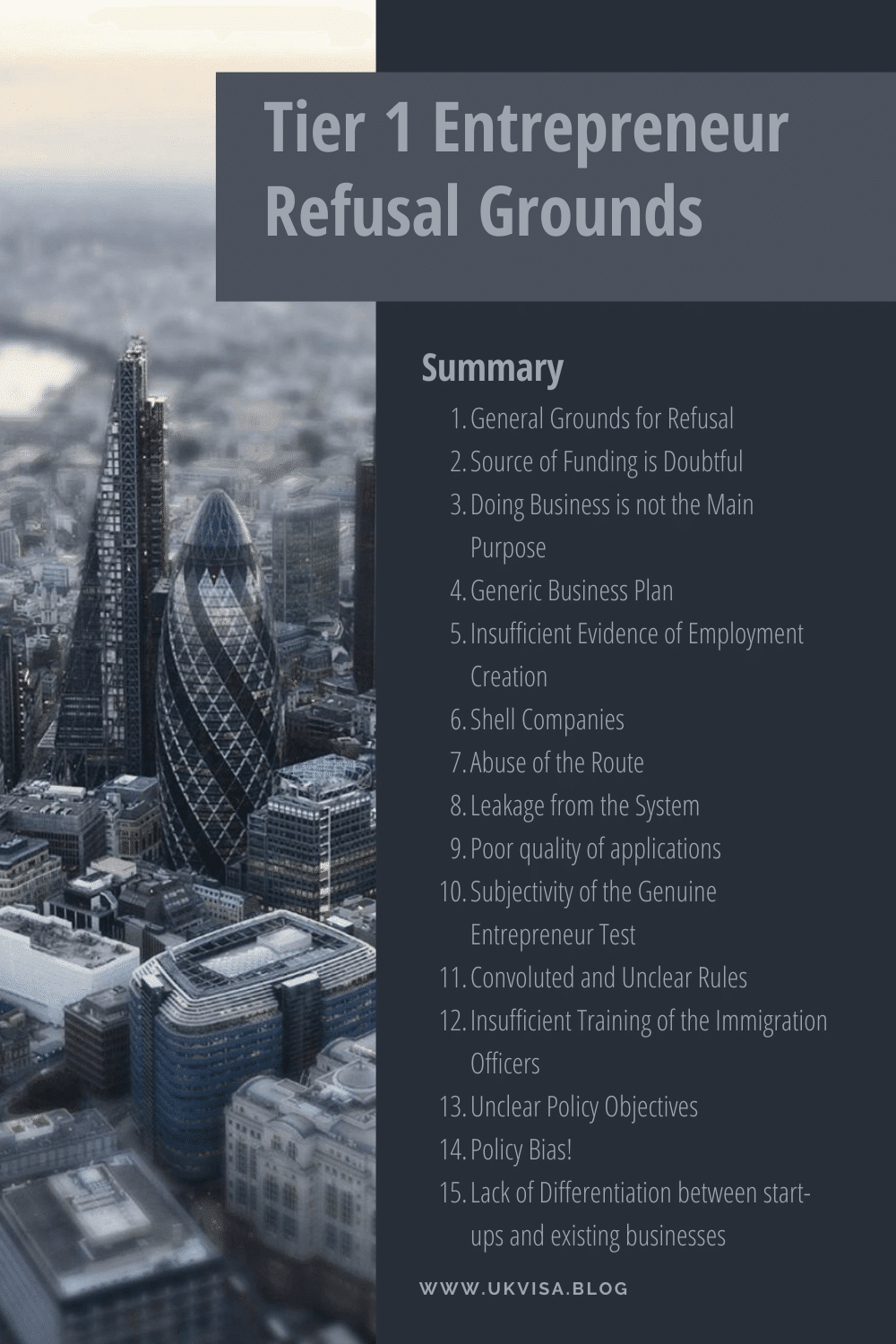